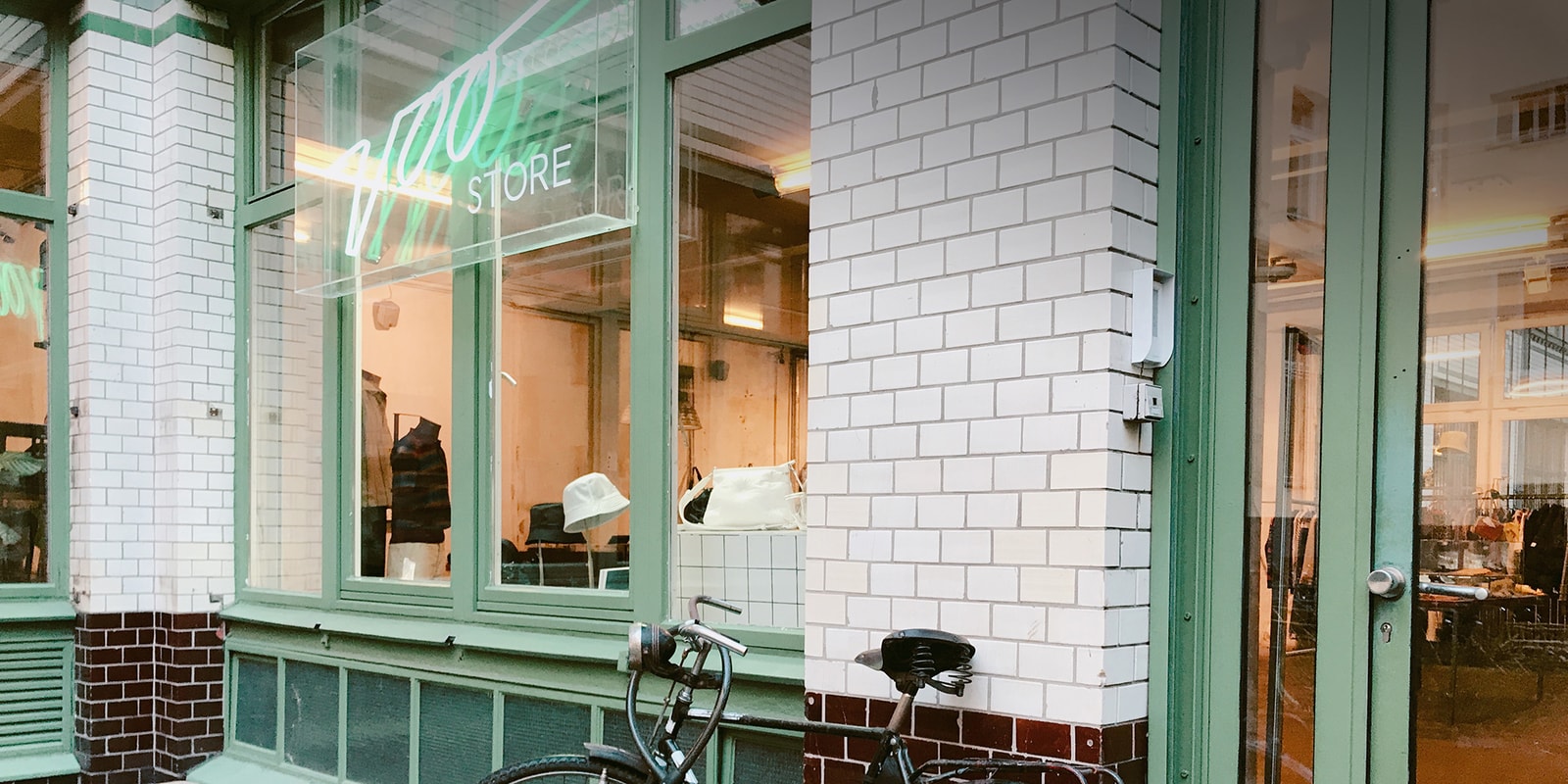 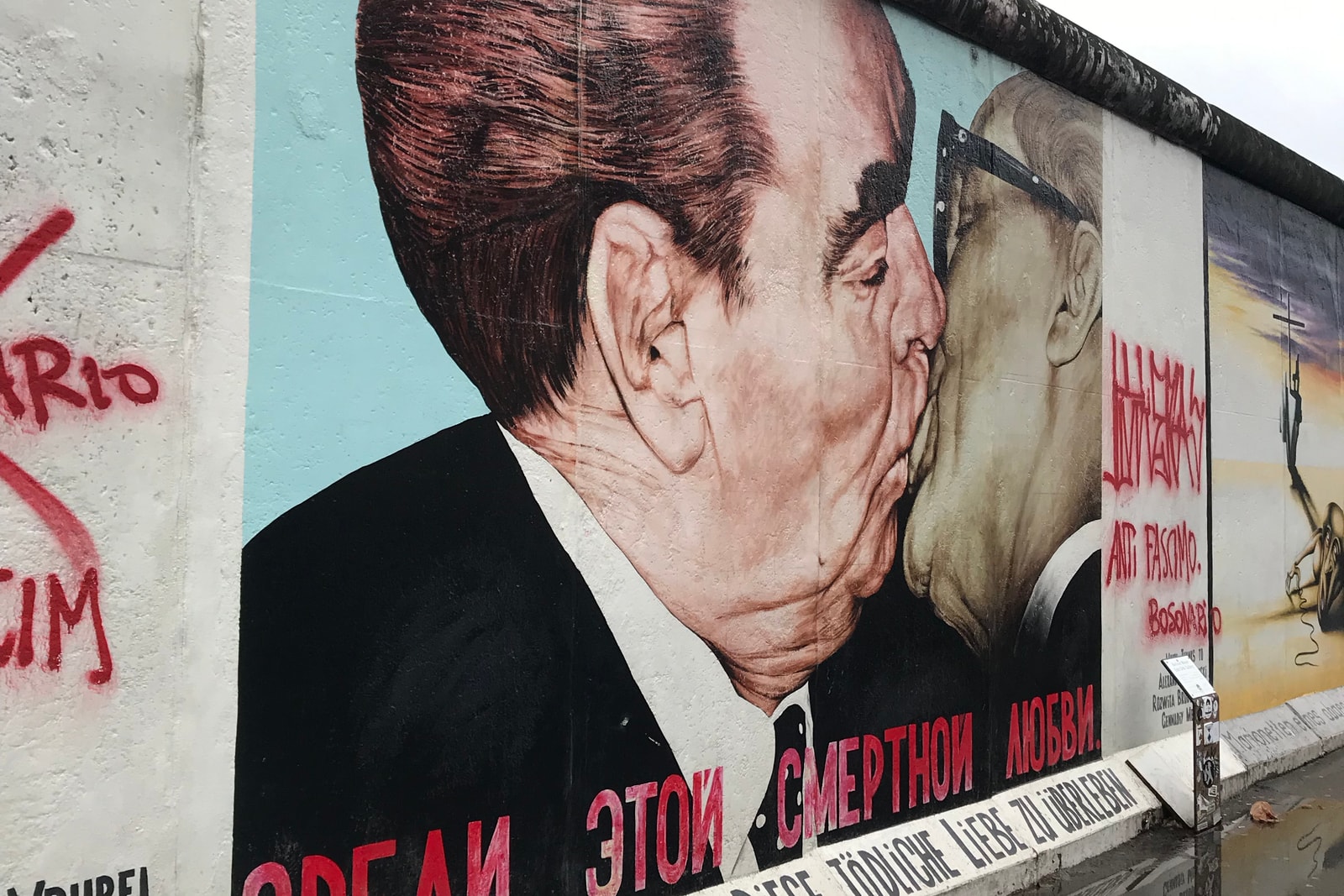 All The Best Places to Shop, Eat and See in Berlin
Here are all the spots you need to see in the German city.

Berlin, Germany’s capital, has a rich history when it comes to everything from culture to fashion and art. Having been the centre of Europe’s turbulent 20th-century, the city boasts several landmarks and remains from the more tumultuous times. From the graffiti-covered Berlin Wall, to to the Bradenburg Gate, Berlin is filled with relics from the past and signs of a burgeoning future.

Now, the city is a bustling hub for a younger generation, where music, fashion and art take the scene. With a techno music scene like no other, and cult clubs like Berghain to show for it, Berlin has quickly risen to the top of Europe’s best destinations for music, parties and fun. In addition, the city has a rich fashion landscape which is filled with shopping destinations, vintage hotspots where the creative industries are taking over.

Take a look at some of our top places to visit in the German city below. 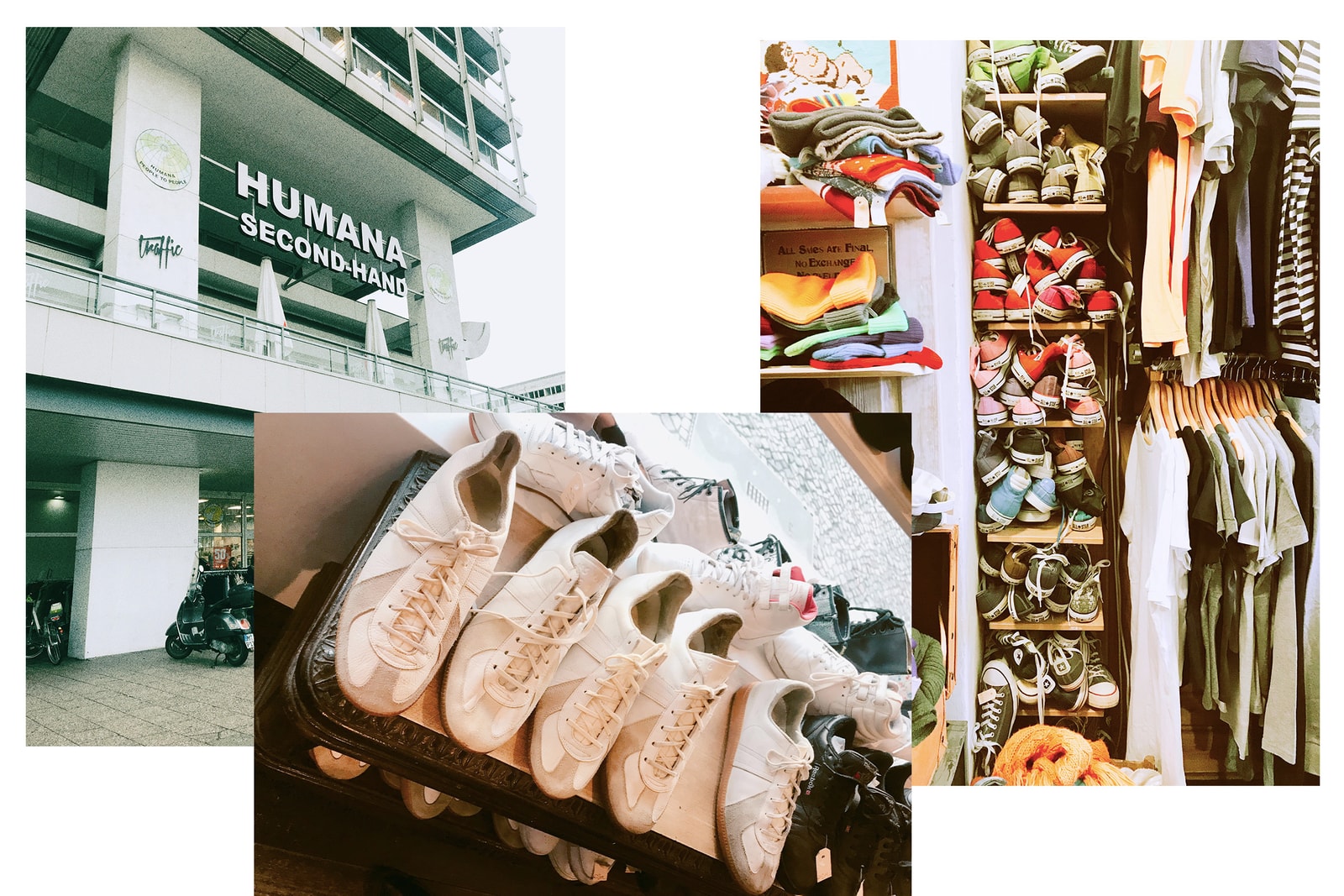 HUMANA Second Hand is the place to go if you’re looking for a good bargain. When it comes to second hand and thrifting, it’s a store to visit if you’re ready to dive in head first to racks and racks of clothes. It’s what you’d call a “hit or miss,” but if you’re lucky you may come across pieces from brands like Burberry and more.

Stepping into Paul’s Boutique is overwhelming to say the least. The small space is packed with everything from vintage jerseys to vibrant Converse in the colors of the rainbow, and you’ll easily be able to find pieces from labels like adidas, Nike, FILA, Champion and more. Have a browse and make sure to look through all the racks, because you never know what you’ll find.

At Ironic Gallery you can find all the best pieces from the ’90s, including Buffalo sneakers and Spice Girls T-shirts on full display. The store also features all the best punk-inspired pieces, from decked out leather jackets to denim vests. It’s a must-see if you’re on the hunt for unique pieces you’ll cherish for the rest of your life.

On the more high-end vintage side, Lena’s Lovely Vintage takes the cake. In the store you’ll find retro gowns, gorgeous coats and even grails like ’80s Christian Dior or old Céline pumps. You may have to spend a bit more than in your average thrift store, but you don’t want to miss this goldmine. 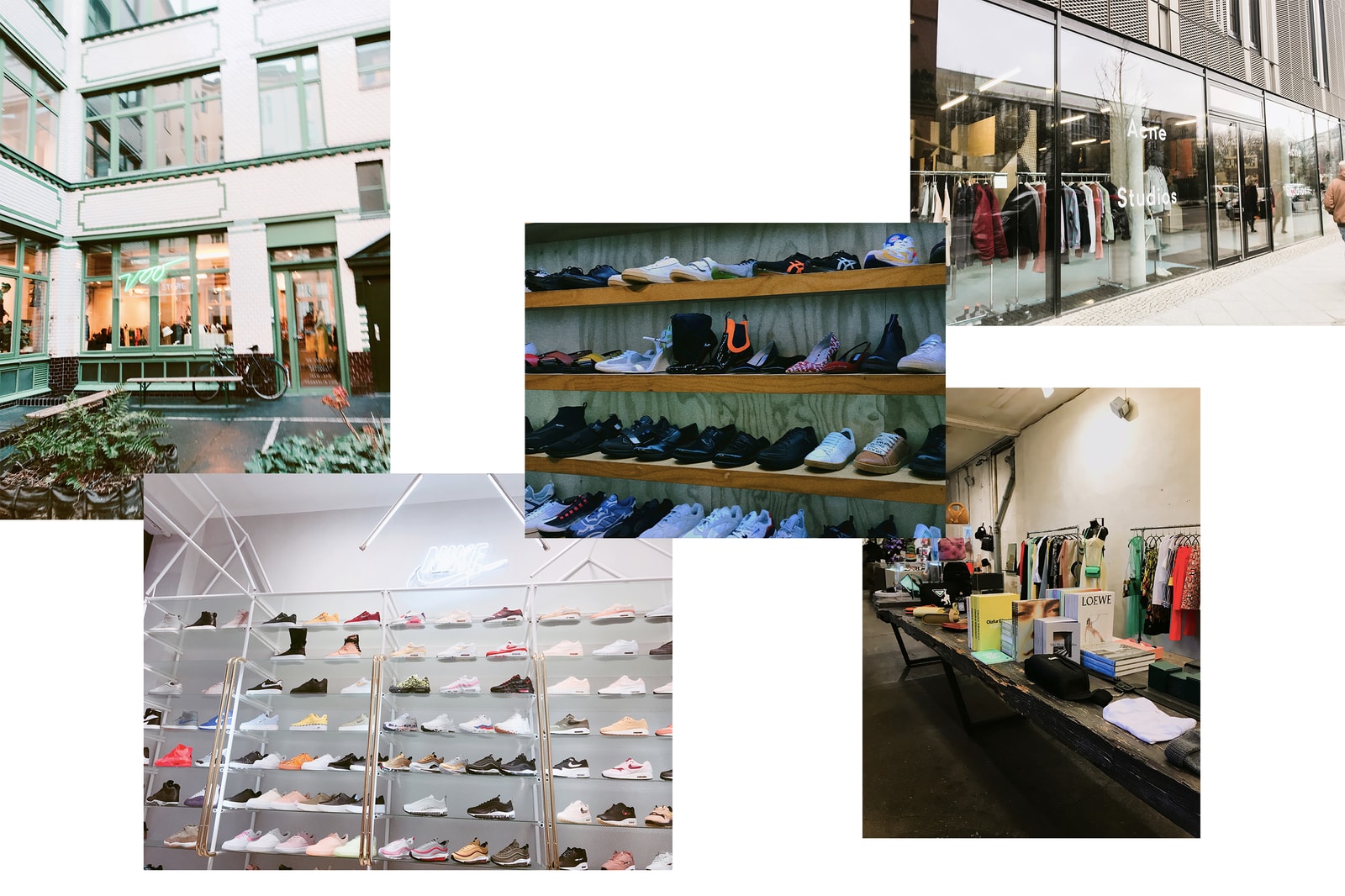 It goes without saying that one must visit Berlin’s famous Voo Store when in the city. Stocking Prada, Raf Simons, Maison Margiela and so much more, it’s the place to come if you’re looking for high-end designer pieces. The perfectly curated retail space is a dream for fashion lovers, and also features a small café if you need a coffee break during your shopping.

Danish label Wood Wood stocks all the latest womenswear and menswear pieces, including its own label Wood Wood as well as COMME des GARÇONS PLAY, Champion and other well-known brands. The retail space is just as drool-worthy as it’s online site, and it’s guaranteed you’ll find streetwear-ready pieces for all occasions.

Streetwear aficionados, this one is for you. Boasting Heron Preston, Acne Studios, Raf Simons and more, Soto Store is the best place to come to cop all the hottest luxury streetwear labels on the market. Not only is the store the perfect place to come and browse, you’ll also feel inspired by the aesthetic interior.

Stepping into Overkill is like entering sneaker heaven – literally. The whole store is filled from top to bottom with all the hottest creps, and also features a second floor which sells apparel from Stone Island, Stussy and more. In addition, the sneaker giant has also opened Overkill Women‘s right next door, for all the ladies looking to cop all the best trainers on the market from Nike, adidas, FILA, Skechers and so many more.

The Corner is perfect for luxury lovers, as the store describes itself as “Fashion, Art & Lifestyle Store” and stocks Balenciaga, CELINE, Saint Laurent and more. It’s also the place to visit if you’re looking to stock up on bougie fragrances from Le Labo, or buy chic interior from Gucci.

Make sure to stop by Swedish label Acne Studio‘s gorgeous store in Berlin. Filled to the brim with all the must-have sneakers, bags and apparel, you won’t regret paying a visit to the gorgeous store. 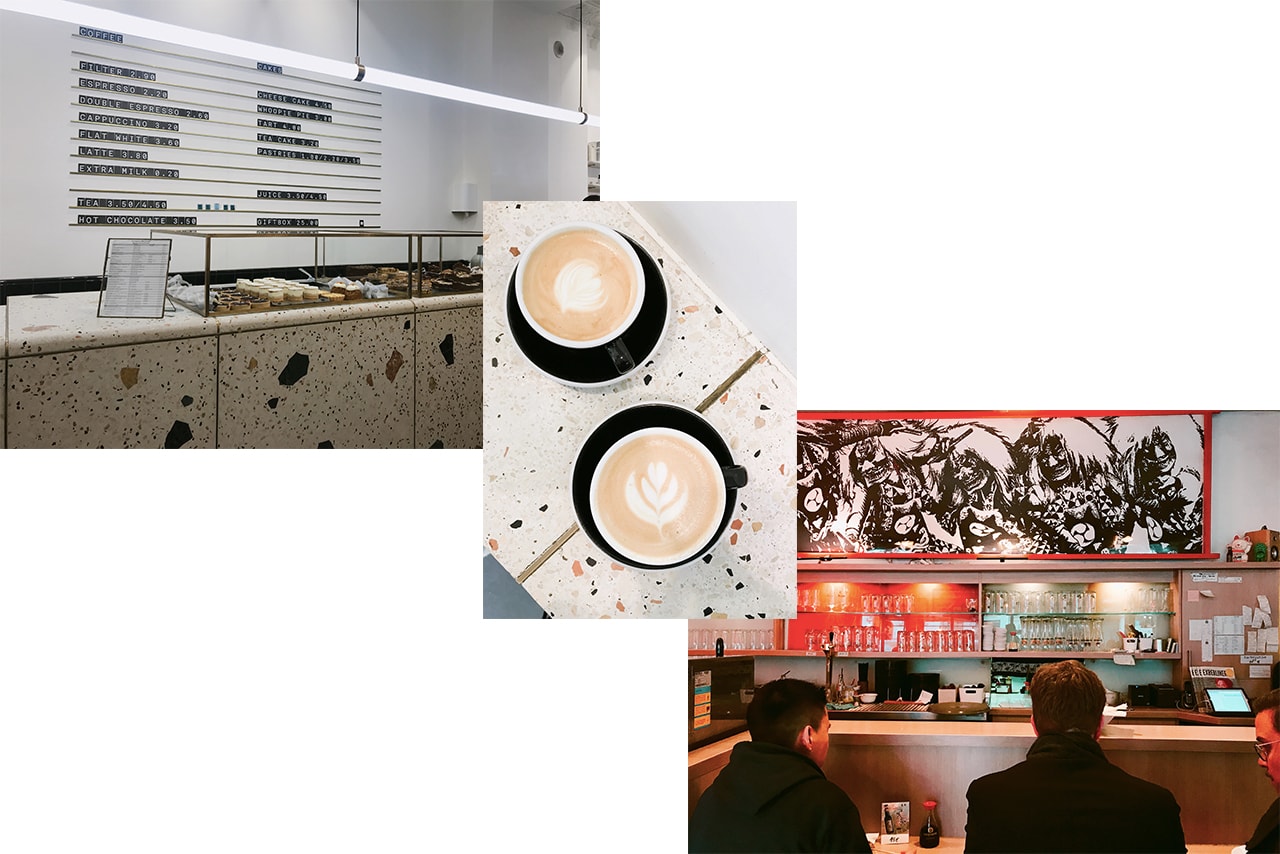 After a long day of shopping, walking and sight-seeing, there’s nothing better than a hearty bowl of ramen. Feast on a delicious bowl of noodles, and snack on edamame and gyoza until you’re rolling all the way home.

Dudu is the perfect place to come if you’re looking for Asian fusion food. The restaurant has everything from classic Phô to fried sushi rolls on the menu, and is also the perfect cozy place to go for lunch or dinner.

Of course, a guide wouldn’t be complete without a place to get your coffee fix. If you’re all about fancy coffee, head to Five Elephants Café and sip on the most delicious cappuccino you’ll ever drink. The café also has a selection of pastries and cakes, if you fancy a little mid-day treat.

Burgermeister is as straightforward as it can be. Delicious burgers, just the way you want it. With both tourists and locals lining up, you can be assured that the burgers are as good as the reviews say. Whether you come for a quick lunch or dinner, the restaurant’s cliché interior (it’s located in what used to be an old public bathroom) will make for many Instagram-ready pics throughout your meal.

ZOLA’s Neopolitan-style pizza has quickly become a Berlin favorite since it opened in 2015, and rightfully so. With a huge wood-fire oven, your pizza will be nice and crispy with the perfect amount of cheese, and will get you craving more. It also comes at a great price point, and is the perfect place to hit up if you like a cozy pizza moment.