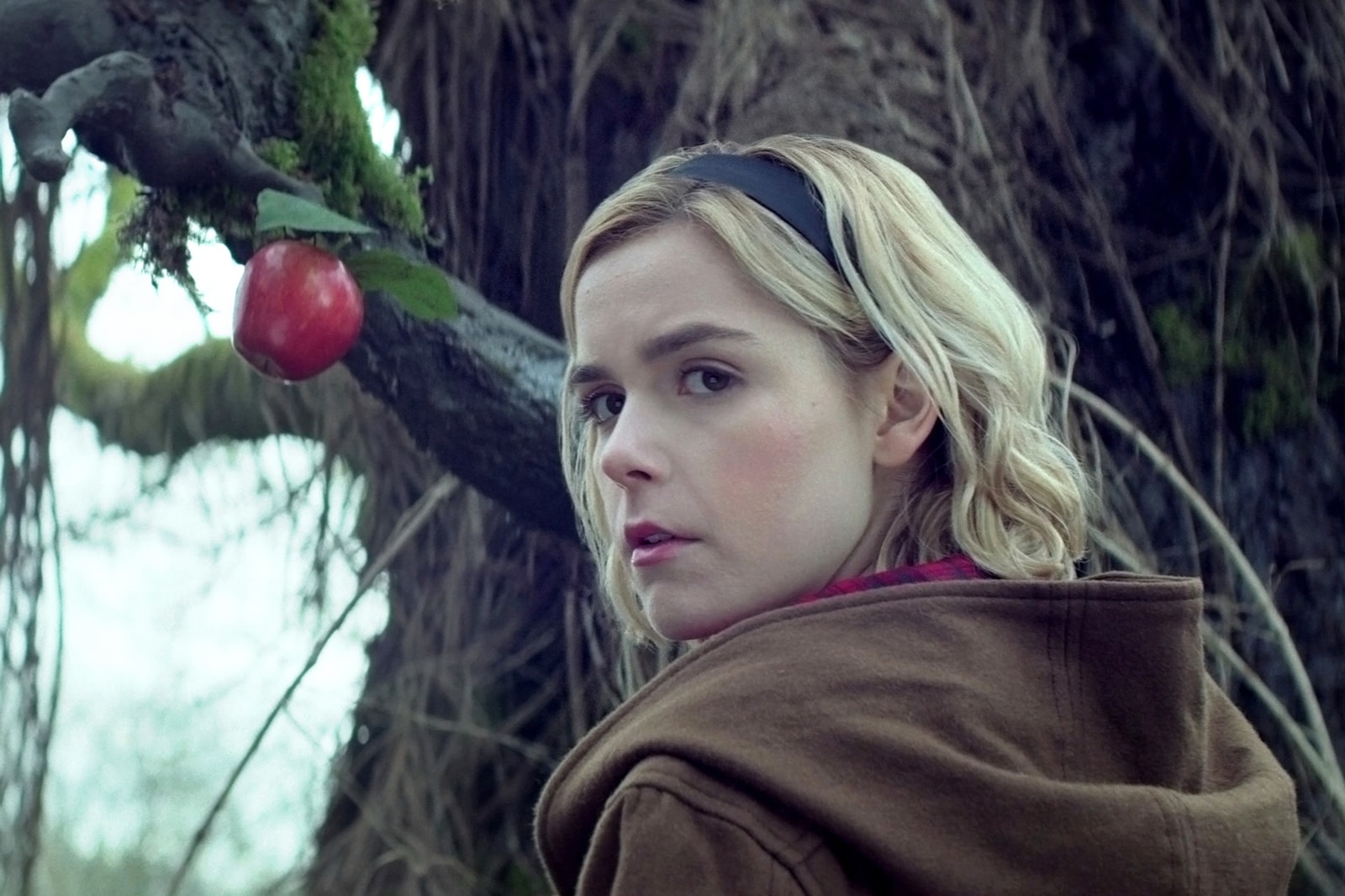 Can Sabrina Spellman be the Buffy Summers for a New Generation?
A look back at one of the most iconic female heroines ahead of the premiere of ‘Chilling Adventures of Sabrina.’

Before there was Edward Cullen, there was Angel. Before there was Emily Fields, there was Willow Rosenberg. For some of the most iconic characters seen in both film and television during the aughts, Buffy the Vampire Slayer helped pave the way for unexplored territory and unprecedented representation. With legendary writer Joss Whedon as the mastermind behind the series, it’s unsurprising that Buffy became legendary as a genre-changing phenomenon known for its surprisingly palatable balance of ass-kickery (by a powerful female lead, no less), the supernatural and quippy one-liners.

When Buffy sadly came to a close in 2003 after seven extraordinary seasons, the show’s legacy endured as one of the most highly regarded shows of the decade. Eleven years after the show first aired, we are now expecting the premiere of a new reboot series that has the potential to fill the Buffy-shaped void that haunts us. The first trailer for Netflix‘s Chilling Adventures of Sabrina dropped last week and we’re already gagging. With rising actress Kiernan Shipka taking the lead role as Sabrina Spellman herself, our first taste of the series reveals a much darker take from the original Sabrina the Teenage Witch series based on the Archie Comics of the same name, which famously starred Melissa Joan Hart. Although many of the series’ most beloved characters appear once again – including Salem, of course – the entire atmosphere is markedly different. Taking after the more sinister route of the Riverdale reboot (which was also developed by Roberto Aguirre-Sacasa), we are without question expecting great things from the new vision.

Although we are certainly not condoning the fact that anyone or anything can replace Buffy the Vampire Slayer, we have to admit that the new Sabrina reboot does bear strikingly similar attributes. Could Chilling Adventures of Sabrina be the new evil-fighting voice of this generation, post-Buffy? We are all ears to find out. 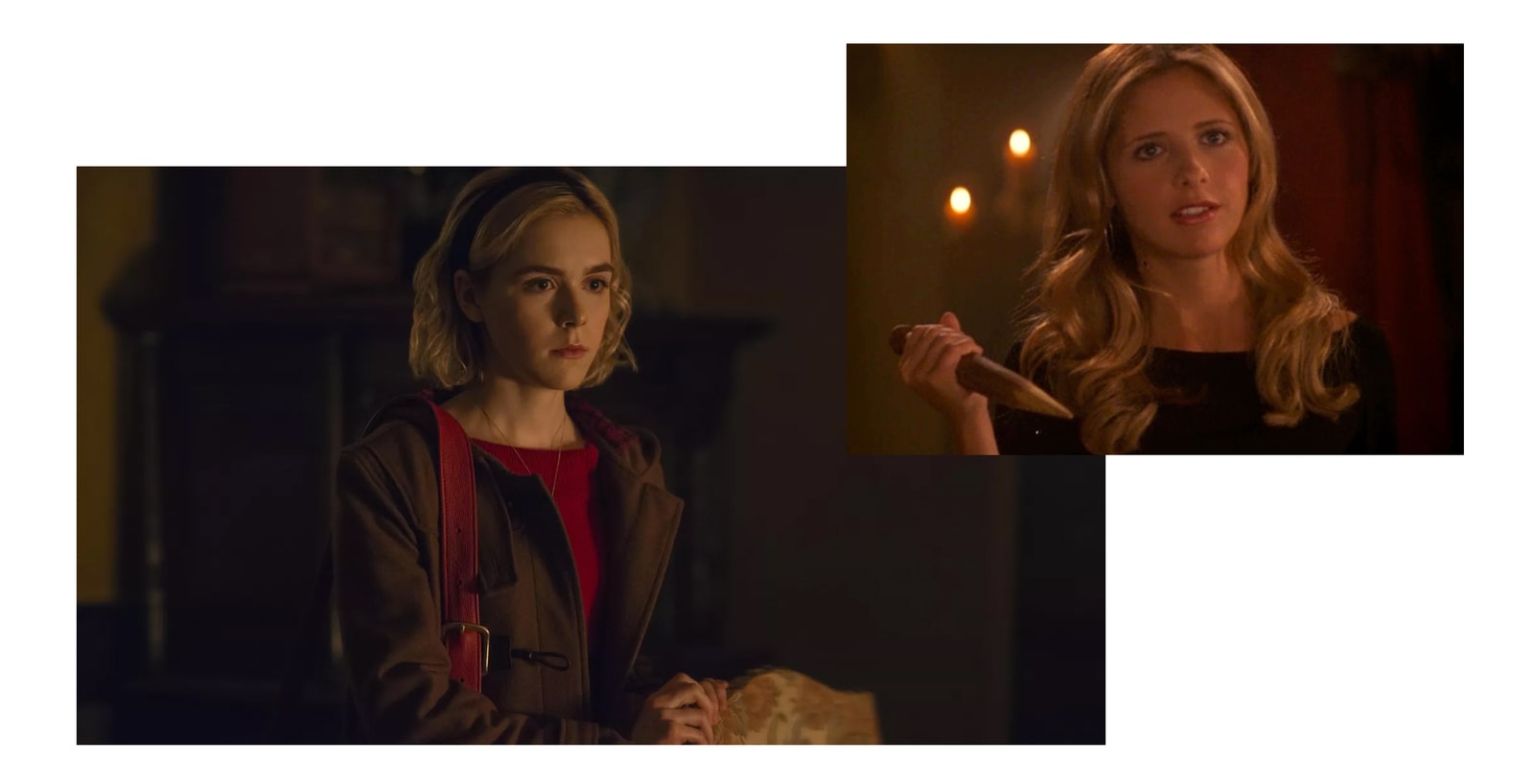 Sabrina Victoria Spellman made her debut in 1962 as the titular character in the Archie Comics series, Sabrina the Teenage Witch. The character was then translated into a live-action television program starring Melissa Joan Hart, which ran from 1996 to 2003 (coincidentally, this is the exact same timeline that Buffy also ran for on television). Although the comic series initially introduced the protagonist as an accidental product of a magic potion, the TV series instead explains that she is actually half-human, half-witch (her mother is a “mortal,” while her father is a wizard). The new Netflix series will be following the latter backstory. Millennials might also remember Sabrina: The Animated Series, which had a brief run from 1999 to 2000.

No matter which series you watch (or read), however, the core group of characters remains the same: Sabrina is raised by her two witch aunts, Hilda and Zelda, and the three of them live together with their black cat, Salem Saberhagen. Although earlier versions of the comic story portrayed Salem as a typical family pet who is unable to talk, the sitcom instead introduced the feline as a witch who has been turned into a cat with the ability to speak, as a form of punishment for multiple world domination attempts. Sabrina’s love interest also remains to be Harvey Kinkle (who is played by rising actor Ross Lynch of My Friend Dahmer fame) and from what we can see in the Chilling Adventures of Sabrina trailer, they seem to be a pair of young lovebirds indeed.

The story, of course, also still takes place in the fictional town of Greendale, which is apparently located near Riverdale where Archie Andrews and gang resides. Although the original sitcom painted the picture of a quaint little township, the new reboot shows a much darker environment – one that perhaps has much more in common with Sleepy Hollow. Maybe it’s because everything ending with -dale seems to unquestionably carry a sense of old-world charm, but it’s certainly difficult not to draw parallels with the demon-ridden town of Sunnydale, famously situated above an active Hellmouth entrance as seen in Buffy the Vampire Slayer. Rampant with every sort of evil that you can imagine – from vampires and sorcerers, to ghosts and werewolves – Sunnydale was your typical breeding ground for plenty of monstrosities. Although it’s too early to tell what varieties are slated to haunt Sabrina Spellman, we’re certainly betting that other witches are just the start of her problems.

Buffy was always accompanied by her hodgepodge group of friends endearingly nicknamed the “Scooby Gang,” which comprised of Wiccan Willow Rosenberg, vampire with a soul Angel, vampire without a soul (well, for most of the show anyway) Spike, her Watcher Giles, mortal best friend Xander Harris, and many more (yes, Cordelia too *eye roll*). Although Sabrina’s squad will most likely not be tailing her as closely as the “Scooby Gang” did with Buffy, her family will undoubtedly always have her back and play a critical role in her daily adventures.

The Return of Evil Comedy

The first Buffy episode I ever watched was “Fear, Itself” from the fourth season. In the episode, everyone’s worst fears come to life and unluckily for me, I happened to catch the show at the exact moment when a decorative, plastic skeleton comes to life as a real skeleton. I was eight-years-old and that one scene haunted me for years. In fact, I wasn’t able to watch another episode of Buffy until I was 15 – three years after the series finale aired. However, after a friend lent me her entire DVD box set of the series, I was hooked and promptly finished the entire show within a few months. Buffy will always hold a special place in my heart because I had never before watched a show in which the lead character was so unapologetically fearless and who absolutely refused to be constrained by her gender. Here was this petite teenager driving a stake through a graveyard full of vampires on a school night and no one even batted a lash.

Despite all of the show’s dark and gory undertones, however, it was still iconic for its cheeky script thanks to writer and series creator Joss Whedon. Even through all of the episodes that were grotesquely ghastly and even heartbreakingly desolate, the cast is still able to seamlessly deliver their hallmark one-liners with spot-on, comedic timing. Although I am not entirely confident that any contemporary show will quite deliver anything comparable to Whedon-style humor, it is still sentimental to see a show skilfully balance the unlikely dichotomy defined by evil themes and lighthearted humor together.

It is exciting, however, to see a new teen program that is not afraid to really show some true horror. Unlike other teen dramas such as Teen Wolf or The Originals, which offer a rather diluted take on the genre, the trailer for Sabrina seems to provide a glimpse of some truly uncensored terror. Aside from a diabolic coven with faces distorted like a scene straight out of Insidious, the trailer also seems to tease tableaux that might be likened to The Exorcist or American Horror Story: Cult (not Coven, thank goodness). Much like Buffy did, Sabrina seems to be pushing boundaries with what might be considered suitable for a young audience – you can expect the show to warm your heart with its teenage romance one second, and the next having you in a cold sweat convinced that there’s something in the house. That very same protagonist that is seen at a high school house party, also appears in the trailer a few seconds later at the centre of a ritual circle, having a symbol drawn on her forehead in blood. Either way, I am definitely here for the creepy and freaky, so Netflix: bring it on.

When Buffy the Vampire Slayer first debuted in 1996, Buffy Summers was a character ahead of her time. Experiencing sacrifice, friendship and loss with more depth than many other characters – male or female – on television at the time, she paved the way for years to come when it came to creating strong female leads for other women to look up to. Displaying both strength and empathy at once, Buffy became much more than a fighter of the next Big Bad – she was a complex figure that struggled with her own demons in a way that was relatable, despite the show’s supernatural elements. From struggling to understand her place in the world, to learning what it means to truly conquer your fears, Buffy is an enduring character that will remain one of television’s most iconic heroines.

Although the plot of Sabrina remains to be a question mark for the time being, what little we have seen from the trailer undoubtedly shows a character who is coming into her own. We already see a scene of utter defiance in which she refuses to sign her life away, sure to send chills down your spine, and another in which she seems to be exploring and understanding her powers. Although Sabrina Spellman is certainly not expected to be a perfect role model (after all, Buffy certainly had her own fair share of flaws), but it is the way that these women embrace these weaknesses and overcome them is what truly defines a character that a viewer can relate with, someone that they can see a part of themselves in. In today’s world of television, the young viewer is infinitely more savvy. They no longer believe in the damsel in distress who is defined by the love interest. Young girls want to see a character with flaws, someone who is battling demons and most importantly, someone who accepts herself before seeking approval from others. 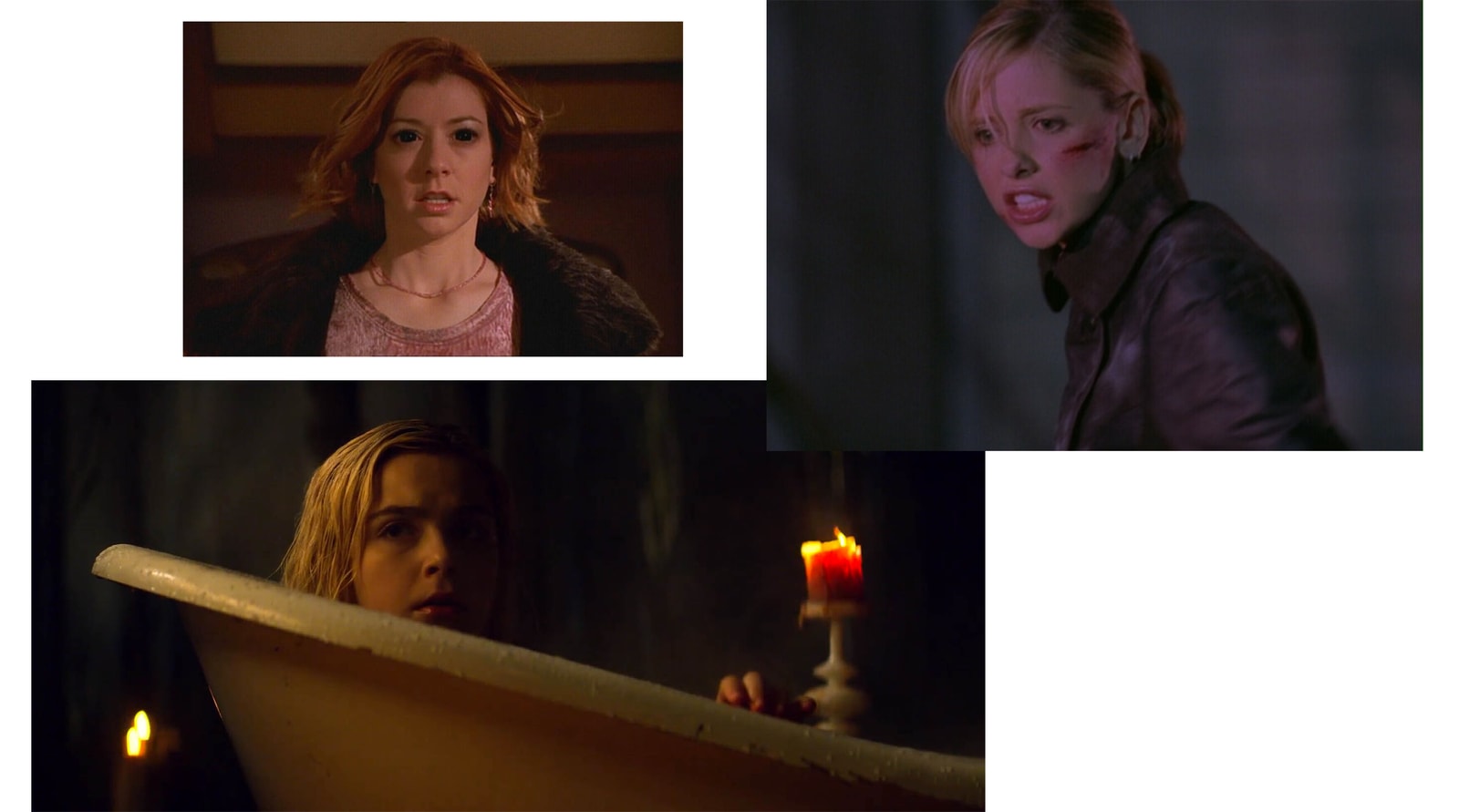 “In every generation there is a chosen one. She alone will stand against the vampires the demons and the forces of darkness. She is the slayer.” The iconic phrase from the Buffy opening credits. Yes, it’s almost cringingly corny, but this single statement has defined a generation and has come to represent what a heroine should be like. Buffy did not exist for the male gaze, in the way that so many female warriors before her were created. Her persona was not concocted with the purpose of a new sex symbol in mind. Joss Whedon himself told Empire magazine these origins for the character:

“In the mid-1980s, I’d gotten so tired of slasher film cliches, especially the dumb, oversexed blond stumbling into a dark place to have sex with a boyfriend, only to be killed. I began thinking that I would love to see a scene where a ditsy blond walks into a dark alley, a monster attacks her and she kicks its ass. After all those times the poor girl had sex and got herself killed for it, I just wanted her to be able to take care of herself.”

Although it is yet to be determined whether Sabrina Spellman will be the cultural phenomenon that Buffy Summers proved to be, the similarities between the two are striking – but definitely not in a negative way. Sabrina carries many of the same elements that Buffy did, which creates hope that the show will be a true homage to Joss Whedon’s legacy, not replace it. Episode-one Buffy Summers was not as self-assured as season-seven Buffy when she saved the world in the final episode. Her journey through the show’s seven-year run saw her grow as a character and audiences were compelled to follow along for the ride. Our only hope is that Sabrina Spellman can do the same – inspire a generation of young women and slay a slew of Big Bads along the way.

Chilling Adventures of Sabrina will premiere on Netflix come October 26.